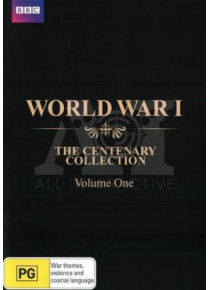 Four Documentaries about WW1 are included;

WWI saw the demise of many of its Royal Houses--including King George V, Tsar Nicholas II and Kaiser Wilhelm II. This fascinating series reveals the political and personal stories of their tragic demise.FIRST WORLD WAR FROM ABOVE:
This unique aerial perspective of a war ravaged Europe is a rare historical find and has never been brought to the screen before.CHURCHILL'S FIRST WORLD WAR:
This excellent documentary illuminates the lesser-known period in Churchill's life where he was disgraced both politically and militarily, before making a comeback that foreshadowed his WWII glories.WORLD WAR I'S TUNNELS OF DEATH - THE BIG DIG:
Covering World War I's biggest archaeological dig, witness the discovery of some of the best-preserved trenches, bunkers and tunnels ever found on the Western Front. If you dig Tony Robertson's Time Team you are sure to love this episode.THE LAST DAY OF WORLD WAR ONE:
Travelling to the battlefields of France and Belgium, Michael Palin discovers what happened during the final hours leading up to clam on 11th November 1918--Armistice Day.