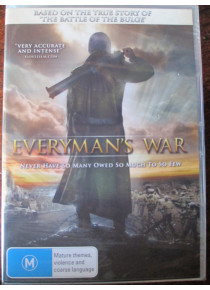 Everyman's War - True Story from the Battle of the Bulge

A story from Battle of the Bulge

As the seasoned infantry and tank units of the German 11th Panzer “Ghost” division move silently into position on the snow covered hills around Nennig Germany ,a battle weary GI and his unit stand ready to defend the small town, a key position in the Allied advance to win the war.

Outgunned and outnumbered, Sgt Don Smith struggles to find hope and courage against overwhelming odds in one of the decisive confrontations in the “Battle of the Bulge” during WWII.

His squad of GI’s of the 94th Infantry Division lay dug in on the ridge-line outside of town. No one in high command believed that German forces would attack in the sub zero temperatures and near blizzard conditions. As the pre-dawn attack comes, with communications down Sgt. Smith is left with no choice but to make his way through enemy fire, unarmed and wounded, into town and warn of the coming attack. Based on actual accounts “Everyman’s War” explores the heroic events of this decorated veterans courage and the struggle between duty and desire. Between the prospect of the life and love, Dorine that waits at home and the harsh realities of war which marks the pivotal epoch in his life as he discovers that the loss of hope can be worse than the loss of life.