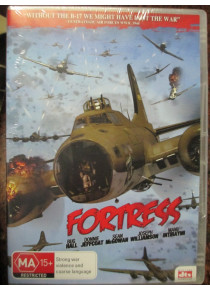 The B17 Flying Fortress (Made by Boeing thus the 'B' code﻿) was the USAF heavy bomber of WW2. Along with the Lancaster these two aircraft were acclaimed as making one of the greatest contributions to winning the European war.
In WW2, Battles were fought on the ground, the War was won in the air.
The human cost in being part of Bomber Command was high.
This movie depicts one of the crews of the B17 during WW2 -
Their aircraft, Their missions, Their survival.

When the commander of a B-17 Flying Fortress bomber is killed in action, his replacement, a young, naive pilot struggles to be accepted by the plane's already tight-knit crew. Ordered into a suicide mission, their only chance for survival is to band together as brothers in battle. With unparalleled aerial action, Fortress pays homage to the sacrifices of an entire generation during the most important war in history.﻿