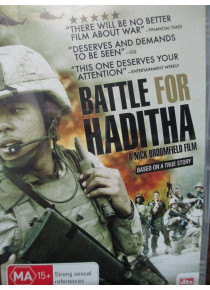 November 19th, 2005, Haditha, Iraq. Iraqi insurgents bomb a convoy of US Marines, resulting in the death of their most popular officer.

Enraged by this loss, his young Marine buddies carry out a brutal retaliation.
Their violent house-searches lead to the massacre of 24 people, many of whom are women and children--tragic casualties of a war they cannot control.

The Marines too are victims, attacked, wounded, and forced to respond in the way they have been trained. Nick Broomfield's acclaimed dramatic and moving recreation of this fateful day in 2005 immerses us in the dust and smoke of warfare as no other film on Iraq has done.﻿