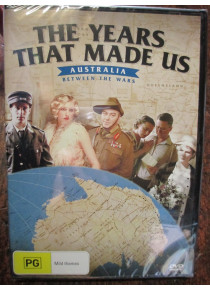 The Years That Made Us - Australia Pre WW2 DVD

The Years That Made Us - Australia Between the Wars - DVD

The Years That Made Us - Australia Between the Wars - DVD
The program screened in three episodes;
1: The Roaring 20s
2: Survival
3: The Gathering Storm﻿

Generations of Australians have been taught that our collective national identity was forged on the bloody slopes of Gallipoli, but in truth it was the two decades following the Great War that shaped the enduring character of our nation. Between 1919 and 1939, Australia was transformed from a rural colonial backwater into a developing economic force and regional power.

As the fledgling Commonwealth was challenged by conflicts of ideology, the hardships of the Great Depression and the gathering war clouds in Europe and the Pacific, political leaders Billy Hughes, Stanley Bruce, Joseph Lyons, Robert Menzies and John Curtin shaped social, economic and foreign policy that would have a profound influence on Australian history and our way of life. Walkley Award-winning journalist and author Chris Masters investigates this tumultuous era of our history, recounting the personal stories of everyday Australians who railed against adversity and helped lay the foundations of modern Australia.