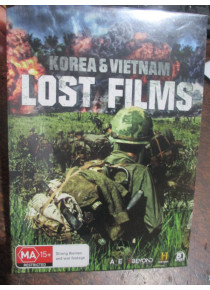 From the makers of the acclaimed HISTORY™ programs WWII In HD  comes the definitive story of the Korean War and Vietnam In HD programs.
Over 7 hours of top rated War Documentaries (without ads)
This combined special DVD released 2015

Revealing the pain, glory and pathos of an often forgotten conflict fought at the mid-point of the 20th Century.

It was the first conflict to fall under the newly-formed United Nations’ watch; the first war where jet fighters became a common sight in the skies above the battlefield; the first major flashpoint of the Cold War and the nuclear age. As Eastern and Western powers circled each other like wary prize fighters, the Korean conflict soon became a proxy war as an intervention force led by the United States and its allies quickly found themselves pitted against a North Korean military assisted by the resources of newly-formed Communist China and the Soviet Union.

The war raged for three years at a cost of over two millions lives before an armistice delivered an uneasy peace in 1953; a legacy that still hangs in balance to this day across a divided Korean nation.

Experience Vietnam War of the 1960's from the frontline. An epic 6 part miniseries explores the war through the eyes of 13 serviceman.Utilising in what producers call lost films from that era. Majority of which were taken in true widescreen format.
You will find that the footage is very clean and precise in detail