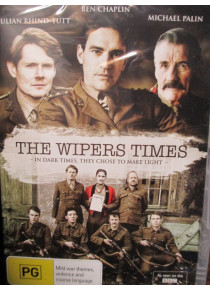 Based on the remarkable true story of a satirical newspaper published on the front lines of World War One, this poignant drama revels in the extraordinary resilience of the human spirit in the face of overwhelming adversity.

It's 1916 and Captain Fred Roberts (Ben Chaplin), a diamond prospector-turned-soldier, leads a small detachment of British soldiers through the ruins of Ypres, whereupon he and his men make an amazing discovery in a bombed-out building - an abandoned printing press. Roberts has an idea - why not produce a newspaper?

The newspaper proves a hit with the troops on the Western Front, however, its production and circulation is fraught with peril in the face of wartime horrors. Its penchant for lampooning the "top brass" also incurs the wrath of the humourless Lieutenant-General Howfield (Ben Daniels) who wants it banned. With the benevolent General Mitford (Michael Palin) on his side, can Roberts' comic distraction to the mayhem of war survive?

Written by Ian Hislop and Nick Newman, and featuring a brilliant cast including: Ben Chaplin, Julian Rhind-Tutt and Michael Palin, The Wipers Times tells for the first time how these inspirational men used humour and wit to remain sane amidst one of the deadliest conflicts in modern history.﻿