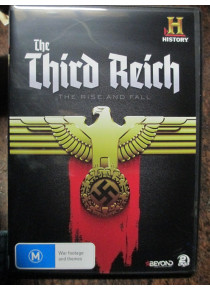 Since the end of World War II, the Third Reich has been scrutinised and dissected. Now, as the "Greatest Generation" fades into history, the image of 40,000 uniformed Nazis goose-stepping in perfect synchronisation represents what many people know about history's most dangerously successful totalitarian government. Dig deep beneath the surface of our collective understanding of the Third Reich as History unearths what we don't know about the epic rise of the individuals who comprised one of the most fascinating and complex regimes of recent history and their colossal fall.

The Third Reich uncovers unfamiliar anecdotes and fascinating details about the Nazi Party and raids the treasure trove of archives the Nazis left behind, including rarely seen German newsreel recordings along with other unique footage carried home by Russian troops.﻿