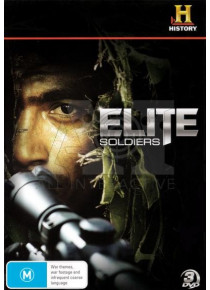 3x Complete programs that when first released were $90 in total.

THE COMPLETE HISTORY OF THE NAVY SEALS:

Explore the history of the elite Navy Sea, Air and Land (SEAL) teams, whose origins date back to the Navy Combat Demolition Units of World War II. The role of the SEALs has evolved to see them employed in arenas of direct action, special reconnaissance, unconventional warfare, hostage rescue, and counter-terrorism. The Complete History of the Navy Seals recounts the stories of honour, valour, and commitment of these elite servicemen.

COMPLETE HISTORY OF THE GREEN BERETS:

Learn why JFK referred to the famous green military headdress as a badge of courage. The Green Berets roots can be traced to the Office of Strategic Services (OSS) in World War II, as elite soldiers trained in the fledgling tactics of unconventional warfare. Today, these Quiet Professionals of the US military take their place as elite commandos and high level instructors.

DEATH FROM ABOVE: A HISTORY OF THE AIRBORNE INFANTRY:

Parachute into the battle zone in Death From Above: A History of the Airborne Infantry, which looks at the ultimate swashbuckler soldier: the airborne infantryman. First devised as a military tactic in World War I, it was not until World War II that the airborne unit was used with dramatic and strategic effect, from the German invasions of Norway and Denmark, to the Allied invasion of Normandy.﻿