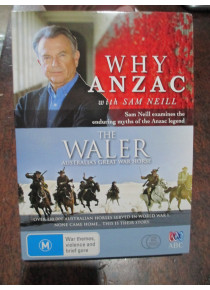 The Waler Australian War Horse: literally the backbone of Australia's Famous Light Horse Regiments throughout the many Battles of WW1. This doco drama takes us on an epic journey from the outback of Australia, across the vast Indian Ocean, to the pyramids of Egypt, the living hell that was Gallipoli and the unforgiving desert sands of the Middle East.


Over 130,000 Australian horses served in the Great War of 1914-18. Nearly 30,000 were engaged in the Middle East. Popularly known as Walers it was in the desert sands that their legend was born. They carried their men to victory on the long road to Damascus, but at wars end they did not come home. This is the story of their colonial origins, their gallant service and their shameful fate.﻿
Also tells the story of two famous WW1 Walers - Bill The Bastard and Midnight.