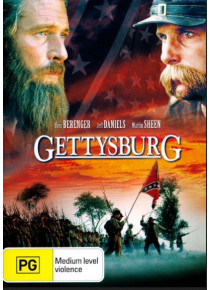 Fought during the summer of 1863 when the Confederacy advanced into Pennsylvania. This film which has been acclaimed as 'awesome major event movie' concerns the events leading to and the 3 days of the Gettysburg Battle.

This magnificent epic production is based on Michael Shaara's Pulitzer prize winning The Killer Angels. Filmed at the actual battle locations, even the boots being worn were authenticated for historical accuracy.

This is the 2x DVD Disc edition with numerous special features