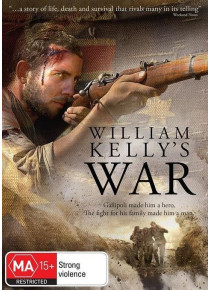 An Australian made movie relates the effects of World War I on a family. The movie begins at the beginning of the Great War in 1914 when brothers Billy and Jack Kelly and a cousin Paddy enlist for World War I service with the AIF. Billy is a farm trained (roo shooter) marksman who becomes part of an elite World War I sniper team. Australian Journalist, Keith Murdoch is embedded with Billy’s group to cover frontline action for the newspapers back home. Billy, Jack and Paddy become celebrated war heroes back in Australia.

Billy's sniper abilities and courage see him awarded the Legion of Honour. During a major assault on the impregnable Hindenburg Line, Paddy is killed in action and is awarded the Victoria Cross.

Film plot continues showing the boys returning from the war and problems at home.

This locally produced film was released in 2014 without much fanfare.
I had not heard of it before seeing it on the DVD release catalogs, quite a good movie.﻿