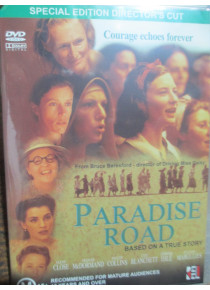 Paradise Road a 1997 movie which is based on the true story of a group of Australian, British and Dutch women after the fall of Singapore during 1942. The Producers used the wartime diary of Betty Jeffrey OAM who was a nurse with the 2nd/10th Australian General Hospital during World War II. She became a POW of the Japanese and was interned in Dutch East Indies. She later wrote a book of her experiences is titled 'White Coolies'.

A graphic portrayal of what women had to endure as prisoners of war at the hands of the Imperial Japanese Army.