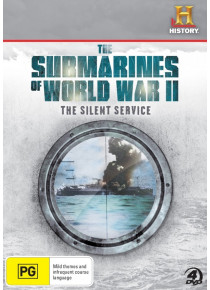 The Submarines Of WW II: The Silent Service

The Submarines Of WW II: The Silent Service DVD

A fascinating series from History™ explores the world of the U.S. Navy Submariner in World War II. Dive to periscope depth in the Pacific and hunt a convoy of Japanese freighters, surface in the Atlantic and fire upon a stricken German U-Boat, then sneak into Tokyo Bay and wreak havoc upon the Japanese Fleet.

Learn about the unique breed of men who lived and hunted under the sea, while discussing submarine technology and its use in war. Explore the tactics used to destroy the enemy, how submarines contributed to the final defeat of Imperial Japan and Nazi Germany, and learn how the development of submarine technology during this period led to the creation of today's advanced war machines.

Take a journey beneath the waves and discover the incredible story behind The Submarines Of WW II: The Silent Service.