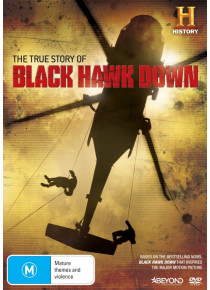 THE TRUE STORY OF BLACK HAWK DOWN DVD

On October 3, 1993, an elite assault force of 120 infantry were dropped into Mogadishu to abduct two lieutenants of the Somalian warlord Mohamed Farrah Aidid. The mission was planned to take one hour, but when two Black Hawk helicopters were shot down, the men on the ground found themselves outnumbered and literally fighting for their lives. The images of dead soldiers being dragged through the streets left a deep scar on America's psyche.

Based on Mark Bowden's bestseller Black Hawk Down and later adapted into the feature-length movie starring Josh Hartnett and Eric Bana, THE TRUE STORY OF BLACK HAWK DOWN is a compelling, minute-by-minute look at the battle that claimed 18 American lives. Mark Bowden, author of the bestselling book about the incident, vividly guides us through the entire mission while US Rangers and Somali militiamen share their harrowing experiences. Balancing exceptional combat footage, brilliant commentary and the recollections of those who were there, this is an unforgettable look at the horror of modern warfare and the gallantry of men under fire.