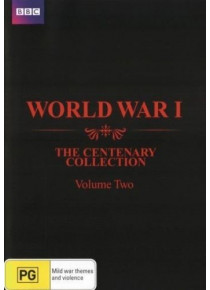 Four Documentaries about WW1 are included;

I WAS THERE: THE GREAT WAR INTERVIEWS: In the early 1960s, the BBC interviewed 280 eyewitnesses of the First World War for the series, The Great War. Using never-before-seen footage from these interviews, this film illuminates the poignant human experience of the war, through the eyes of those who survived it.

THE WORLD'S WAR: Drawing on personal stories, this documentary dissects how the complexities of Empire and the hypocrisies of race played out against the background of a global struggle for dominance, revealing why the war involved so many different peoples and how much they contributed in money and raw materials as well as men.

THE PITY OF WAR: Was the Great War a great mistake? In this innovative programme, Harvard historian Professor Niall Ferguson offers a different perspective on the First World War and argues that Britain's decision to enter the war was a tragic mistake.

KATE ADIE'S WOMEN OF WORLD WAR ONE: In 1914, women all over Europe experienced the impact of a war that reached into every corner of people's lives. War came to the Home Front and ushered in a seismic shift in the lives of women far from the front line of battle. In this passionately authored film, Kate Adie tells the story of the First World War through the eyes of British women.