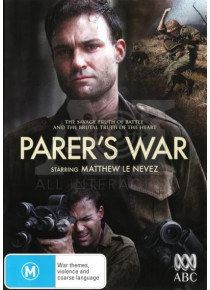 It's 1942 - Darwin has been bombed and 29 year-old, wartime cinematographer Damien Parer (Matthew Le Nevez), is filming Australian troops as they fight the Japanese on the deadly razorback ridges of New Guinea.

Risking his own life, Damien is determined to make the film that will shake Australians out of their complacency and let them know that the war is on their doorstep.

Damien's thoughts frequently stray to his beautiful, strong-willed and feisty, long-time girlfriend Marie Cotter (Adelaide Clemens). He has been keeping her at arm's length - terrified that he will come home maimed and broken - and unable to commit.

Based on the lives of real people and actual events, Parer's War tells the story of a man caught between two worlds - at ease amongst the troops and in the midst of jungle warfare, but struggling to win the love of his life.﻿