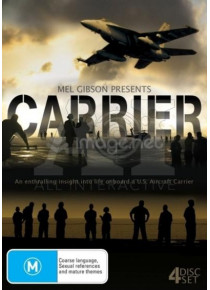 This documentary titled Carrier follows the deployment, from May 7, 2005 to November 8, 2005, of the supercarrier USS Nimitz﻿. Presentation of Mel Gibson.

A 10 part series 4x DVD Discs filmed aboard the USS Nimitz during a six month deployment around the world, providing a glimpse into the high stakes world on board a US Aircraft Carrier. Following a core group of servicemen, from the admiral of the fleet to the fighter pilots to the youngest sailor, CARRIER profiles how they navigate personal conflicts around their jobs, families, faith, patriotism, love, rites of passage and the war on terror. This series puts you right alongside the 5000 plus crew required to keep this 'floating city' ready for any eventuality.﻿