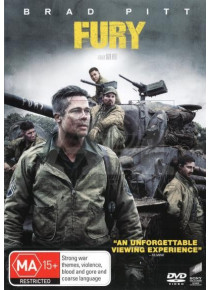 April, 1945. As the Allies make their final push in the European Theatre, a battle-hardened army Sergeant commands a Sherman tank and his five-man crew on a deadly mission behind enemy lines. Out-numbered, out-gunned, and with a rookie soldier thrust into their platoon, Wardaddy and his men face overwhelming odds in their heroic attempts to strike at the heart of Nazi Germany

Fury is actually based on a collection of true World War II "Tankers" stories. The stories for the movie were obtained from US veteran "Tankers" who were still surviving at the time of filming.﻿.

I recommend this, as a fast moving action war movie which would be enjoyed by all that have an interest in the life of a "Tanker" during World War II.﻿ The movie also introduces the actual veterans discussing the World War II action with the cast.﻿

Pitt spoke with veterans about their experiences, including a now 90-year-old man named Ray Stewart who fought at the Battle of the Bulge as a tank gunner and driver.

"We fought the war over again right in front of those movie guys," Stewart said. "We looked around and saw them sitting there with their mouths open. They seemed sort of flabbergasted."
BEST JOB I EVER HAD !