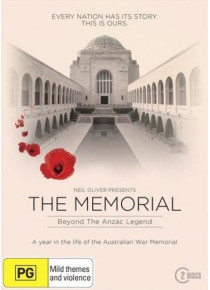 Historian Neil Oliver reveals an inspirational journey through the Australian War Memorial Canberra.
He reflects upon sincere stories about our World War I heroes, showing some of the Memorial's many relics from that war.
While following the every day life at the Memorial over a period of 12 months, Oliver takes us to the battlefields at Gallipoli and the Western Front to find where soldiers fought and died.

He is assisted in this five-part series by Australia's top historians and military experts.

A moving tribute not only to one of the world's greatest museums but also a memorial to those that fought for Australia.

A large five-part program produced by Warner Bros. for the Foxtel network and History Channel 100 We Remember Program - 2 DVD Discs with duration 263 minutes.