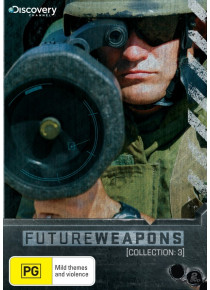 Ex-Navy SEAL Richard Machowicz delves into the most lethal and sinister weapons yet devised, taking viewers into the macabre and secret world of weapons development once guarded by only the toughest of Military personnel. The Future Weapons series explores the science and technology behind the creation of the latest weapons and reveals those who spend their lives inventing new ways to obliterate the enemy.

Testing weapons from around the world in the most extreme of scenarios, Future Weapons takes aim at the secret device that uses water power to tear apart terrorist bombs, investigates TASER 's newest device which has been configured for use by the military, tests an amazing state-of-the-art weapon that can be converted from assault rifle to sniper rifle in seconds and goes into the arctic where the Stryker Mobile Gun System, M56E1 Smoke Generator and the Arctic Warfare Super Magnum Sniper Rifle are put to the test in freezing conditions.
Episodes Included:
Firepower
Non-Lethal Special
Close Protection
Israel
Guns
Future Warrior
Alaska Special
Hard Target