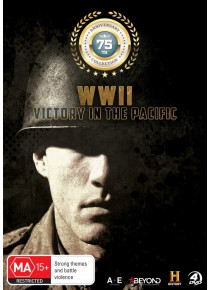 This program is a collection of History Channel's military documentaries connected with the Pacific war during WWII. All of these have been released previously under these respective names.  Duration is a massive running time of 15 hours﻿
The collection includes the following,

The Pacific: The Most Famous Battles ' All﻿ Episodes﻿.

Experience the bloodiest battles of the Pacific Theatre as History examines the personalities, weapons, firepower, tactics and leadership that shaped the course of the war.

At Guadalcanal, where U.S. forces encountered Japanese troops in their first major ground engagement, the Allies successfully employed combined arms tactics, setting the tone for future campaigns in the theatre.


Iwo Jima, famous for its indelible image of victorious U.S. Marines hoisting 'Old Glory' over Mount Suribachi, was one of the most intense battles of the war, as entrenched Japanese troops valiantly fought to the death. Finally, Okinawa provides a testament to the futility of war, as ragged Japanese defenders resorted to suicide attacks in an attempt to halt the Allies' unstoppable march towards Japan's home islands, in what would be the final battle of the war..

﻿D Days in the Pacific all episodes:﻿
1. Death at the Tide Line﻿
2. Closing the Jaws﻿
3. The Final Graveyard﻿