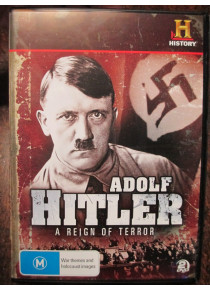 Adolf Hitler A Reign of Terror DVD﻿
This is a 2 disc collection of 5 individual History Channel﻿ documentaries about Adolf Hitler.

Hitler and the Occult
Nazi party grew out of several occult groups that sprung up in the late 19th century as a reaction to the advanced materialism and technology of the era. Hitler's imprisonment after the failed 1923 Munich Beer Hall PUTSCH would make him a national hero for his defence of a strong German state.

The Private Voice of Hitler
Much of the public archive footage of Adolf Hitler was taken as silent movies.
Using special computer technology, this documentary enables us for the first time to lip read the silent film.

Hitler and Stalin The Roots of Evil
Delve into the minds of the two of the worlds most brutal dictators and mass murderers of the 20th century.

Hunting Hitler
It was in 1944, in the Führer's main wartime headquarters known as the Wolf's Lair that Hitler came closest to being assassinated.
This is the story of those who tried to change the course of history.

Elite German forces of World War II
Go inside the most feared units of the Nazi military machine and see how they carried out their missions. They paved the way for some of the most dramatic German victories of World War II and introduced new tactics, strategies and even a whole new way of warfare the world.﻿