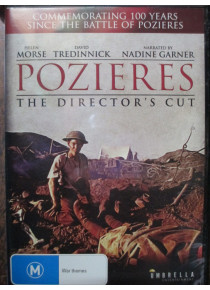 Pozieres DVD commemorating 100 years since the Battle of Pozieres.
On 23 July 1916, First Anzac Corps attacked the German line at the northern French village of Pozieres.﻿ They successfully captured the village on the first day but were subjected to merciless continuous bombardment and German counterattacks.
To their credit they held the line until they were relieved four days later however they had suffered 5280 casualties.
Over the next few weeks, the Australian 2nd and 4th Division endured even more artillery shelling - said to be the greatest bombardment ever ﻿suffered during the Great War by the AIF.﻿
In just six weeks at Pozieres, Australia suffered 23,000 casualties, including 6000 to 8000 deaths.﻿ This catastrophic loss led Australian Historian, Charles Bean to say of Pozières Ridge "is more densely sown with Australian sacrifice than any other place on earth."﻿

By using dramatic reenactment of real stories this fast-moving documentary reveals the history of the battle from a deeply moving ﻿personal level.﻿