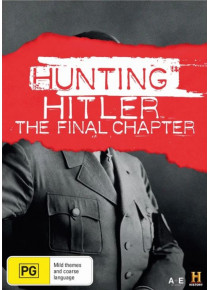 In three seasons of Hunting Hitler, Bob Baer’s investigation proved beyond a shadow of a doubt that Hitler could have successfully fled Germany after the war and disappeared into South America. But the investigation also produced a more unexpected discovery: startling evidence that a 4th Reich was successfully mounting on South American soil with one central goal – a devastating attack on the United States. HUNTING HITLER: THE FINAL CHAPTER is a feature-length special that puts Bob back in the war room to investigate the true scope of Hitler’s 4th Reich plans, and explore how the Nazis infiltrated and specifically targeted America after World War II.

The below DVD trailer is from an earlier episode.