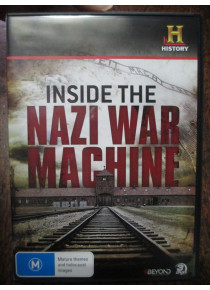 Inside The Nazi War Machine﻿

Produced in 2014 this is a collection of three DVD discs of recent History Channel documentaries about the Nazi era.
The first documentary is :

Engineering Evil: Inside the Holocaust
A chilling documentary of the gross mass slaughter of men women and children killed in the Nazi solution.﻿ The segments covered in this documentary are divided into the following chapters.﻿

Disc 3.
In Search of History
The Nazi Bomb
Doco about the development of the German atomic bomb WW2.