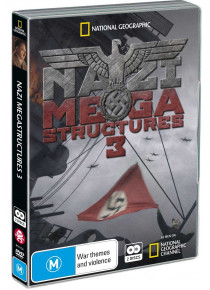 Interview talking about the Third Reich.

“The scope of these projects and the superhuman efforts that brought them to fruition remains astonishing, even 70 years later,” said Executive Producer Simon Young. “We want viewers to understand the extraordinary lengths to which the Nazis went in order to realize their ill-fated dream of world domination. This was a fascinating era of history, made even more chilling by the fact that so many of these structures are still around today.”