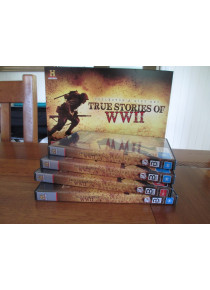 1. TORA! TORA! TORA! THE REAL STORY OF PEARL HARBOUR
On the morning of December 7, 1941, a swarm of Imperial Japanese fighter planes soared over Pearl Harbour, Hawaii. Within minutes, bombs and torpedoes reigned down from the sky on the unsuspecting U.S. Navy fleet sitting at anchor, and a massive Japanese air fleet of over 300 planes had crippled American naval power in the Pacific with one of the most daring military manoeuvres in history. This fascinating feature-length documentary from HISTORY Channel takes an in-depth look at the real story of Pearl Harbour, from the build-up to the attack, and the insurmountable damage and destruction caused on that infamous day.﻿

2. WWII LOST FILMS: THE AIR WAR
Experience the fear and exhilaration of an epic battle waged at an altitude of 25,000 feet as HISTORY Channel travels with four U.S.A.F. veterans on some of the most dangerous, deadly and visually stunning aerial missions of World War II. In an unsung story of bravery and sacrifice, this feature-length special takes viewers on board with the U.S. Eighth Air Force, the vanguard of America's air power who suffered an unimaginable 26,000 combat deaths during the war. Extraordinary archival colour footage - uncovered after a worldwide search and restored with meticulous technique - brings to life this historic fight for the skies.﻿

3. The Gestapo Hitlers Secret Police
Double Disc Collection in itself. All about Hitler, SS , Nazi Party and Gestapo.

4. D-DAY: THE TOTAL STORY
On the morning of June 6, 1944, over 150,000 Allied troops landed on the beaches of Normandy in the largest amphibious assault in military history. Retreat was not an option; success was the only recourse. From tense war room strategy to the full fury of frontline combat, this stunning documentary captures the entire arc of one of the world's greatest battles. Witness the heroism of men plunging headlong into a hail of merciless steel, where a single step could mean the difference between life and death. HISTORY Channel reveals the full story of this crucial turning point of World War II in this powerful first-hand chronicle of the battle.﻿

5. THE THIRD REICH: RISE AND FALL
Dig deep beneath the surface of our collective understanding of the Third Reich as HISTORY Channel unearths what we don't know about the individuals who comprised one of the most fascinating and complex regimes of modern history. This powerful and revealing documentary uncovers familiar anecdotes and fascinating details about the everyday Germans who both followed and opposed Hitler and the Nazi Party, and raids the treasure trove of archives that the Nazis left behind, including rarely-seen German newsreel recordings and unique film footage carried home by victorious Russian troops.﻿

6. WWII LOST FILMS: THE BATTLE FOR IWO JIMA
Forever etched into history with its famous image of U.S. Marines hoisting the flag over Mount Suribachi, the Battle of Iwo Jima reveals a far greater story than just that iconic photograph. The Americans wanted the island for its strategic airfields; for the Japanese, it represented a last-ditch effort to shield their home islands from bomber attacks. The result was one of the bloodiest battles of the war, as fortified Japanese defenders gave no quarter to the Allied wave of men and steel that crashed onto the blacks sands of Iwo Jima. HISTORY Channel presents an immersive look at this momentous battle using gloriously restored, full-colour footage, some of which has never seen before﻿