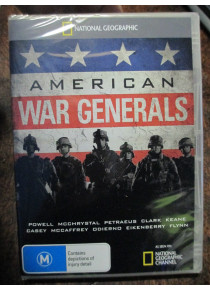 American War Generals is an in-depth two-part study of the Generals who have featured in US military planning and fighting of the most recent world conflicts post Vietnam.
In a most absorbing way National Geo go directly to the
source - the men themselves.

Included in this documentary are interviews with Generals, Powell, McChrystal, Petraeus, Clark, Keane, Casey, McCaffrey, Odierno, Eikenberry and Flynn.﻿ Many these men went on to political careers spanning right up to the present Trump Presidency.﻿

The program tells﻿ of how the US withdrawal from Vietnam shaped America's future wars and the generals who fought them. In this 90min special, America's leading combat Generals talk about how they spent their careers training to fight a conventional enemy like the Soviet Union, with tanks, clear frontlines and an enemy in uniform, but then found themselves bogged down fighting guerilla wars in Iraq and Afghanistan after 9/11 the very type of war the Army hoped it would never again fight after Vietnam.﻿