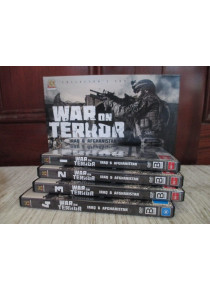 A massive collection of 9 documentaries made for the History Channel all purely about the Iraq and Afghanistan Wars. The Afganistan War really began with the second attack on the World Trade Centre on 9/11 2001.

While it was March 2003 when the United States of America along with coalition forces initiated the war on Iraq.  The coalition forces were able to topple Hussein's regime in just three weeks.

But despite the defeat of the conventional military forces in Iraq and Afghanistan﻿, an Islamic﻿ insurgency has continued an intense guerrilla war.

To 2017, both wars have resulted in near 7,000 troops killed, the long conflict in Iraq and Afghanistan has an estimated cost to the USA of US$6 trillion.﻿﻿

Included in this DVD collection of over 444 minutes duration are the following documentaries.﻿