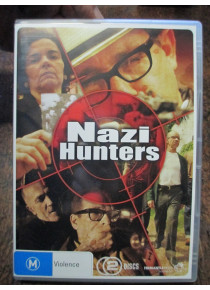 Never before told stories about how secret agents hunted down the real-life Nazis killers who had escaped from Germany after World War II.

This DVD tells the story of one of the greatest man hunts ever perpetuated in human history. Each episode tells the action-packed story of each thrilling hunt. Operations to capture some of the men attributed with the worst atrocities of World War II, men like Adolf Eichmann, Klaus Barbie, Mengele, every story has a plot that's worthy of an Hollywood thriller.

The total members of the Nazi party to escape to South America, after World War II, has never been calculated but is believed to be around 10,000.﻿ Complete German towns were created to house the escapees.﻿