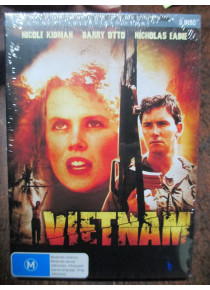 Only available as a pre-owned DVD

One of Australia’s most acclaimed television Mini Series. Produced in 1987, it is the only Australian produced drama mini series about the Vietnam War and times. In fact, it is one of a few movies ever made about the Australian Vietnam war era - the 'Odd Angry Shot' being the another and of recent times the Long Tan Battle movie 'Danger Close'.

Vietnam - Set against the backdrop of Beatlemania, Flower-power and LSD induced euphoria, Vietnam is a stunningly powerful re-enactment of the bitterly controversial issue of Australia’s involvement in what was perceived as an American war. A story with immense power to distress and the magic to move the hardest hearts.

Media is Pre-Owned
This DVD is Pre-owned - It Is in Near New Condition and has been tested and guaranteed to work
DVD Information:
Australian Region 4
DVD Duration Time minutes:
437 minutes - 7 hours - 3 DVD Discs
Movie Format:
16:9 Aspect - PAL Format - DVD