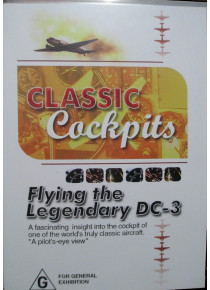 The aircraft featured in this video, was built in 1944, first saw service with the RAF during World War II﻿. Postwar it operated a Sydney Morning Herald newspaper run and then was Registered to the Bureau of Mineral Resources﻿, where it conducted survey work for many years﻿﻿.

The pilot Captain Jack Curtis, began his flying career in the RAAF during World War II. After the war, he joined TAA and served throughout Australia and New Guinea. At the time of filming, he had logged more than 22,000 hours flying DC-3, Dc-6B DC - 9 and Boeing 727.
He died in 2015 at 90 years of age.

The airline Dakota National Air no longer operates﻿. The actual aircraft was vandalised after the demise of the airline. It is currently owned by a toy enterprise.