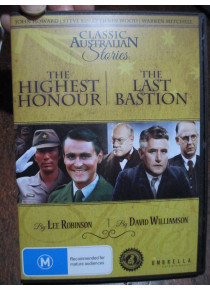 The Highest Honour (also known as Heroes of the Krait) tells the remarkable true story of Australia's involvement in one of the greatest raids in WW2 history.

Comprised of volunteers of all branches of the Allied Forces, Z Special Forces was a secret operations unit of the Australian Army during World War II and came under the direct command of General Douglas MacArthur. In an amazing display of courage and determination, Z Special carried out 284 undercover missions in the south-west Pacific area, the most famous being two daring raids codenamed 'Jaywick' and 'Rimau'.


In the first of these, the 'Krait', a captured Japanese fishing boat, set out from Australia on the longest range seaborne raid ever undertaken in the history of war. The Krait penetrated deep into Japanese held territory, covering over 17,000 kilometres, to attempt its most deadly mission of all. Theirs was a mission that would not only test Z Special's conviction and dedication to one another but the heroic opportunity to garner the highest honour.
From the producers of Attack Force Z, The Highest Honour features an ensemble cast including John Howard (Packed To The Rafters), Steve Bisley (Red Hill), Tony Bonner (The Lighthorsemen), Harold Hopkins (Gallipoli), and Vincent Ball (Breaker Morant).

Special note:
This DVD is brand new, supplied in factory plastic seal. It has been sourced from the Australian Distributor. Made professionally!
DVD Information:
Australian made Region Free
Movie Format:
4:3 Aspect - PAL Format - DVD - Colour
DVD Release Date
2018 but movies were filmed around 1984