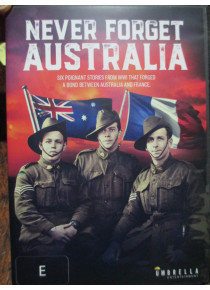 Collection of 6 poignant stories from WWI that began a love affair between Australia and France.
French Orphan Smuggled to Australia
Eight year old 'Digger' was wandering hungry and homeless when he walked into an Australian airmen's mess after WWI. This little French orphan was adopted by the airman who smuggled him to England in an oat sack, then in a wicker basket to Australia.
How Two Pennies Rebuild a School in France
After WWI, a Victorian Aussie boy worked hard to raise two pennies to help rebuild a destroyed school in Villers-Brettoneux, France. A powerful story of courage, hope and perseverance, helping to rebuild this school across the oceans.
Aussies Capture a German Tank
In a devastated battlefield of WWI, 13 Australian soldiers crossed into no-mans-land and returned with a German tank: the Mephisto. Almost 100 years later, this tank survives, the only A7V Sturmpanzerwagen in the world. This is the story of how a Queenslander masterminded bringing this rare relic back to Brisbane.
Aboriginal Diggers
Downtrodden in their own country, Australian aborigines were banned from serving in the miltary, rejected on the grounds of race. But the offer of 6 shillings a day and a trip overseas was too good to miss. This little known story is why Villes-Bretonneux is an unusual name for an aboriginal burial site.
Known Only to God
We will never know his name, where he was born, his age, family, rank, battalion or precisely how and when he died. We will never know who this Australian soldier was. This is known only to God. A powerful story of the journey to bring the Unknown Soldier back to Australia.
ANZAC Day in Villers-Bretonneux
there's a tiny village in France you can drive through in two minutes. The German army did, and on ANZAC day 1918, the ANZACs took it back... a turning point in WWI. Every year on Anzac Day, over 4000 make the pilgrimage to the Australian War Memorial in Villers-Bretonneux to honour the 46,000 Australians and 12,000 New Zealanders who remain there. A touching story, an amazing legacy to the ANZAC's role.
Monash the Master of Surprise
the French will never forget the Aussie General who turned the tide of WWI. Monash understood the significance of surprise and demonstrated new tactics taking Le Hamel & Amiens. King George V knighted Monash in the battlefield - the first in 200 years. Sir John Monash, Australia's most distinguished soldier, left an indelible mark on history.