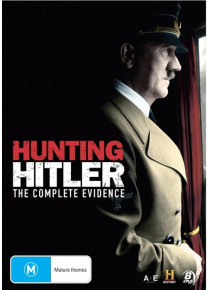 Armed with the most cutting edge technology and newly (2014-2019) released FBI files the ex-CIA team will approach this case like no other investigation.

What CIA veteran investigator Bob Baer and his expert Team find will astound you - among the revelations, plans to drop a nuclear bomb on Manhatten, routes that thousands of NAZI followed to South America, aided by the Catholic Church Spain and other Nations, the extent of large NAZI communities in several South American countries. Secrets from declassified documents reveal a path of deception, cunning plans laid down by Hitler to enable the Reich to prosper after the fall of Nazi Germany in 1945.

Season Two Documentaries are;
The Hunt Continues
The Compound Eyewitness Accounts
The Web
The Factory
Unmarked Grave the Nazi Colony
The Secret Island

And the new feature length 2020 episode - The Final Chapter

In three seasons of Hunting Hitler, Bob Baer’s investigation proved beyond a shadow of a doubt that Hitler could have successfully fled Germany after the war and disappeared into South America. But the investigation also produced a more unexpected discovery: startling evidence that a 4th Reich was successfully mounting on South American soil with one central goal – a devastating attack on the United States. HUNTING HITLER: THE FINAL CHAPTER is a feature-length special that puts Bob back in the war room to investigate the true scope of Hitler’s 4th Reich plans, and explore how the Nazis infiltrated and specifically targeted America after World War II.

DVD Comment: This DVD is brand new, supplied in factory plastic seal. This DVD is sourced from the Australian Distributor. Made professionally!