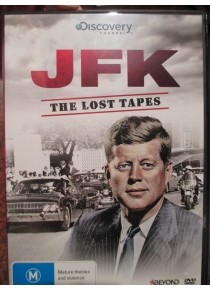 JFK: THE LOST TAPES, new government tapes from Air Force One and testimonies from those on the ground that day, including Clint Hill, the secret service agent responsible for Jackie Kennedy, offer a gripping insight into what happened that momentous day, and the inside story of a government struggling to come to grips with a crisis spiraling further out of control with each passing minute.

Never-before-heard radio recordings from the Dallas Police Department reveal the desperate search for evidence, the frantic manhunt, and the crucial moments that led to the identification and arrest of Lee Harvey Oswald as the murderer of John F. Kennedy. Amidst it all, news radio reports from around Dallas reveal the panic and chaos that threatened to engulf the city.﻿