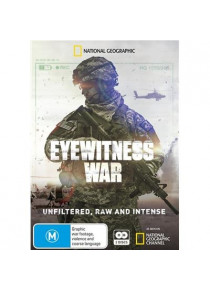 Eyewitness War follows the men and women of the armed forces through the chaos of battle with real-life, first-person footage. See them ready to face whatever hell awaits around every corner -- from screeching bullets to IEDs to rockets. Witness the dangerous missions and perils of war through the eyes of our brave American service members -- as the fighting is happening. Unfiltered, raw and intense, you'll hear their shouts and see their comrades' every move, in first person.

16 Episodes include Chasing Down the Enemy, Caught Outside the Wire, Bleeding Out, Behind Enemy Lines, Battle for Antenna Hill, 12-Hour Firefight, I'm Hit!, Trapped by the Enemy, Out of Ammo, Sniper Hunt, Ambushed, Bomb Squad Boom, Man Down, Closed Quarters Combat, Mountaintop Revenge, and Fallen Hero.﻿