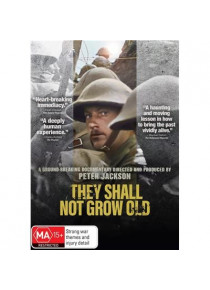 They Shall Not Grow Old Peter Jackson WW1 Film

They Shall Not Grow Old Peter Jackson WW1 Film﻿ DVD

They Shall Not Grow Old Peter Jackson WW1 Film﻿

Using state-of-the-art technology and materials from the BBC and Imperial War Museum, filmmaker Peter Jackson allows the story of World War I to be told by the men who were there.

Life on the front is explored through the voices of the soldiers, who discuss their feelings about the conflict, the food they ate, the friends they made and their dreams of the future.﻿

"Director Peter Jackson's assemblage of restored footage -- colored and rendered in 3D, with added sound effects, voices, and narration -- is an astonishing achievement,"

"An emotionally rich documentary that wows both as a technical achievement and an unforgettable portrait of a terrible period of 20th century history."

"As someone who's seen hundreds of hours of ww1 film watching this documentary was eye opening in deep emotional and surreal ways. It's easy to look at the old black and white film and feel far removed and disconnected as if was just a story you've heard about that may as well have happened 100 years ago "﻿