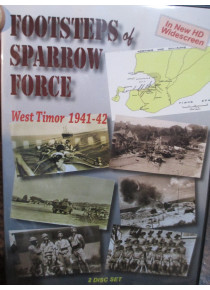 A large collection of information pertaining to Sparrow Force which fought the Japanese in Timor during WW2.  In 1941, Australia sent Sparrow Force to Timor to protect Australia from the advancing Japanese who had just invaded Malaya and bombed Pearl Harbor.

The widescreen doco alone is around 2 hours duration. Hundreds of period photos a 1941 colour movie are shown in this highly interesting Australian production

The BONUS Data CD contains full nominal rolls of most units except the Commando Company.

Value for everyone wanting information on Sparrow Force.