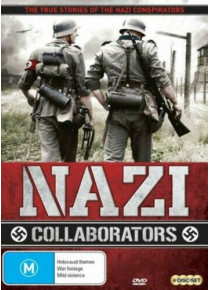 Nazi Collaborators' explores the fascinating and often shocking tales of how individuals from all walks of life from the privileged and the political elite to ordinary working men turned against their nations and races to fight alongside the Nazis during World War 2.

Many did it for financial gain, others for the promise of elevated status. Some believed that siding with the imperialist Germans offered the best chance of survival for their people, whilst others would later claim they would be killed if they refused.

From the Jewish leader who offered up his people as free labour, to the ex-French Prime Minister who actively aided the Nazi hunt for the Resistance. And from the IRA-German plot to invade Northern Ireland to the brutal killing squads of Lithuania, this ground-breaking series explores the complex motivations behind the controversial paths these collaborators chose.