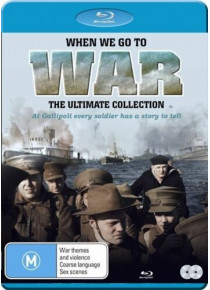 When We Go To War Gallipoli WW1 ANZAC Mini Series

When We Go To War the Mini Series Blu Ray

When We Go To War is a historical saga, that tells the story of six young men and women, who, in 1914 on the eve of World War I, are full of plans and dreams for the future.  Beginning a few weeks before the outbreak of war in August 1914, this epic mini-series follows the landing at Gallipoli in April 1915, the disastrous assault on Chunik Bair and eventual evacuation of Gallipoli in December 1915-through the eyes of New Zealand soldiers, officers, medical staff and family back home!

This special edition includes a bonus DVD disc featuring the new documentary Gallipoli 1915 which is the story of the nine month campaign to capture the Gallipoli peninsula from the Ottoman empire in 1915, in which the British, Australian, New Zealand, Indian and French forces failed to defeat the predominantly Turkish defending army.

For the first time this story is told equally from the Allied and the Ottoman point of view through the voices of Kenan Celik, Turkeys foremost Gallipoli historian and guide, and Stephen Chambers, one of Britains leading historians on the Gallipoli cam﻿