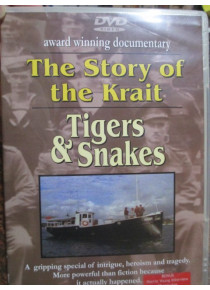 Krait was originally a Japanese fishing vessel based in Singapore named Kofuku Maru. ﻿

The ship eventually reached Australia via Ceylon and India in 1942, and was handed over to the Australian military. In Australian service, she was renamed Krait after the small but deadly snake.

In September 1943, Krait transported members of Z Special Unit to Singapore, where they successfully raided the city's harbour, sinking seven ships. She returned to Australia in October. Krait was used by the Australian military throughout the war, and was present at the surrender of the Japanese forces on Ambon in September 1945.

﻿Horrie Young was a member of the Australian commando unit, Z Special Force on board the Krait, when it made its successful raid on Japanese shipping in Singapore Harbour (Operation Jaywick)﻿ . There is a special extended (one on one) interview with Horrie Young where he answers many questions about the Jaywick mission. Discussing some mysteries and truth or untruths about Operation Jaywick.

The depiction of the mission and the interviews with the Z Special Force veterans make this program a 'must have" for your military collection.﻿