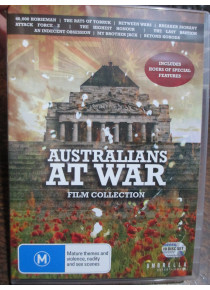 Australian War Film Collection includes Beyond Kokoda - all up massive 1146 minutes of content.

Click here to see other Kokoda Books and DVD


One of the most brutal conflicts in Australian war history, the Kokoda Campaign was a powerful victory that directly saved Australia from the threat of Japanese occupation. Both historians and veterans alike distinguish it as a campaign of exceptional savagery with each army pushing the other back along a muddy, precipitous track over the mountainous spine of New Guinea’s Owen Stanley Range. Troops were reduced to a primal level, such were the inhuman conditions in which the battle was waged and the impossible expectations made on soldiers of both sides at the front line.


The Highest Honour (1982)
Comprised of volunteers of all branches of the Allied Forces, Z Special Forces was a secret operations unit of the Australian Army during World War II and came under the direct command of General Douglas MacArthur.

In an amazing display of courage and determination, Z Special carried out 284 undercover missions in the south-west Pacific area, the most famous being two daring raids codenamed 'Jaywick' and 'Rimau'.

In the first of these, the 'Krait', a captured Japanese fishing boat, set out from Australia on the longest range seaborne raid ever undertaken in the history of war. The Krait penetrated deep into Japanese held territory, covering over 17,000 kilometres, to attempt its most deadly mission of all. Theirs was a mission that would not only test Z Special's conviction and dedication to one another but the heroic opportunity to garner the highest honour.

The Last Bastion (1984)
The year is 1941 - as the dark cloud of World War II hovers perilously over the Southern Hemisphere the people of Australia brace themselves for an uncertain future when Japanese forces get ready to invade. The Last Bastion goes behind closed doors and into the minds of the big decision makers – world dignitaries Franklin Roosevelt (Warren Mitchell), Winston Churchill (Timothy West), Australia's John Curtin (Michael Blakemore), and General Douglas MacArthur (Robert Vaughn). The boundaries are set - transports carrying thousands of men, naval fleets and army divisions are strategically positioned - pawns on over-sized world maps, as a high-stakes game of chess develops between the allies and against the enemy.

40,000 Horsemen (1940)
Best mates Red Gallagher (Grant Taylor), Jim (Chips Rafferty) and Larry (Pat Twohill) face a challenging time as soldiers in 1916. Stationed in Egypt with the promise of grand adventure, all they seem to manage is casual mischief in the Cairo nightclubs.But when German-backed Turkish forces attack British outposts in the Sinai desert, the soldiers climb into the saddle as mounted troops of the Australian Light Horse, participating in a fierce battle at Romani and on to Gaza. With fellow soldiers falling to the enemy, Red and his colleagues must overcome the odds and find the courage to contemplate one final charge – a deadly assault across open ground to Beersheba.

The Rats of Tobruk (1944)
When war breaks out, tough-as-leather drover Bluey (Grant Taylor, On The Beach), dingo trapper Milo (Chips Rafferty, Smiley) and English gent Peter (Oscar® winner Peter Finch, Network) ship out to Africa, ready for adventure.Destined to serve in the North Africa campaign in the 9th Division they become involved in the siege of Tobruk, holding up the advance of Rommel's forces for months. Beleaguered and battle weary the friends fight on, proving to be a considerable challenge to the enemy and a boon to the Allied war effort.

Breaker Morant (1980)
South Africa, 1901. The British war against the Boers has deteriorated into bitter guerilla warfare. A unit of the Bushveldt Carbineers, made up mainly of Australians, is ordered by the British High Command to fight the Boer on it's terms and take no prisoners, an order which will prove fatal to a man they call "The Breaker" - Lieutenant Harry Morant. This classic Australian motion picture of injustice and the horror of war has swept the world to become one of the most acclaimed Australian movies ever made.

Attack Force Z (1981)
Mel Gibson commands an elite military team dispatched during WW II to locate and rescue the survivors of a shot down plane, stranded on a South Pacific island occupied by the Japanese. One of the castaways, a defecting Japanese official, holds the secret to ending the war, and must be saved at all costs. Boasting a top-notch cast including Mel Gibson (Mad Max), Sam Neill (The Dish), John Phillip Law (Barbarella) and John Waters (Breaker Morant). Attack Force Z is a fast moving, action-packed World War II adventure story in the tradition of "THE GUNS OF NAVARONE"".

My Brother Jack (2001)
David Meredith (Matt Day) lives on the Greek Island of Hydra isolated from his emotional and physical past. Through reminiscence we witness the experiences of a young boy growing up in post war inner suburban Melbourne, in a home torn by his father's violence and memories of war. Providing insight into social and political issues relevant to the time we follow David from boy to man as he follows his ambition to become a writer and resolve his own personal battles.


Between Wars (1974)
Taking up residency at Callan Park Asylum in the 1920s, Dr Trenbow embarks on a journey of groundbreaking medical discoveries - using returned soldiers as his subjects - researching theories of psychoanalysis and administering various physical treatments in order to better understand the horrors of war and the long lasting effects it has on the mind.Featuring a superb supporting cast including Judy Morris (The Picture Show Man), Arthur Dignam (The Devil's Playground), Peter Cummins (Storm Boy) and directed by Michael Thornhill (The F J Holden) with Russell Boyd's classy cinematography, Between Wars is a moving portrayal of a well-respected man who would go on to make the first substantial recordings of post traumatic stress disorder.