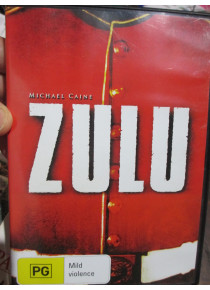 ZULU is one of the great war movies of all time, an epic adventure of courage in the face of incredible odds. Based on a actual battle it tells the amazing tale of around 100 British soldiers who stood fast against an overwhelming force of 4,000 of the Zulu nations mightiest warriors in the defence of Rorkes Drift in 1879.

This classic movie depicts how the British soldiers, many of whom were sick and wounded patients in a field hospital, successfully held off a force of 4,000 Zulu warriors. The film is notable for showing the Zulu army as disciplined and governed by strategy. The film was first shown on the 85th anniversary of the actual battle, 22 January 1964, at the Plaza Theatre in the West End of London.

Superbly photographed in Technirama, few other movies have grippingly captured the tension and terror of combat as wave upon wave of warriors is unleashed on the tiny garrison. Set amongst stunning South African scenery, ZULU is a landmark action film and a fitting tribute to some of the most magnificent acts of heroism in the history of warfare.

Michael Caine's role as the arrogant but courageous Lt. Bromhead brought him international fame, and there are powerful performances from other great British actors including Stanley Baker and Jack Hawkins.

Media is Pre-Owned
This DVD is Pre-owned - No marks on working side of DVD, thus it Is in as New Condition and has been tested and guaranteed to work
DVD Information:
Australian Region 4
Movie Format:
16:9 Aspect - PAL Format - DVD