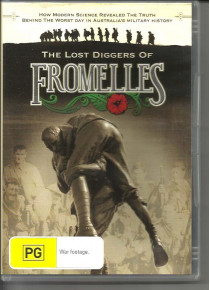 This DVD is a documentary about the Australian involvement in the Battle of Fromelles 1916.

On the night of July 19, 1916, 5,533 Australian soldiers were killed, wounded or went missing, more than the total of casualties in the Boer, Korean and Vietnam wars combined. One Thousand, Nineteen Hundred and Seventeen were killed. Think about that amount killed, 1917. Australians like you and I, neighbours, workmates and countrymen. Unbelievable, and at the time it was not even treated as 'front page news'. In fact, the extraordinary amount of deaths was not even reported!

It was a staggering disaster that should never have happened.

In an astonishing discovery, 250 soldiers from the battle, mostly Australian, were found in unmarked mass graves in Northern France.

This is an exclusive, behind the scenes story of the largest excavation of World War One dead in modern times.
We recommend this DVD to anyone interested in The Battle of Fromelles as it is a great doco not only the LOST DIGGERS but also the whole Battle. It's a Story all Australians will be proud!

ALL OUR DVDS ARE NOT PIRATED, BURNT OR IMPORTED. THEY ARE GENUINE AUSTRALIAN REGION (4) or REGION FREE (UNLESS OTHERWISE STATED SEE 'BOOK CONDITION' TAB ABOVE} DVDS BOUGHT FROM LOCAL MOVIE DISTRIBUTORS. BUY WITH TOTAL CONFIDENCE.