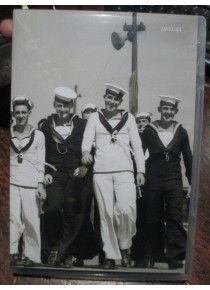 This DVD is a Australian documentary about the WWII mystery of HMAS Sydney.

For sixty-six years it was Australia′s greatest maritime mystery: what happened to the ′pride of the fleet′ HMAS Sydney - was it beaten in a fair fight with the German cruiser Kormoran, or was there treachery involved? Could the Kormoran′s survivors′ account of the battle and its aftermath be believed? Why were there no survivors from Sydney? And where was the wreck?

David Mearns first heard the story of the Sydney in 1996, and it left an indelible impression in his mind. One of the world′s foremost shipwreck hunters, David had successfully located dozens of wrecks in much deeper water. But hunting down the Sydney, a challenge he accepted in 2002, proved his toughest yet, testing his skills as a detective, engineer, marine scientist and navigator. David′s quest, which unfolded over six years, took him around the world, from the war archives in Germany, to the homes of Kormoran survivors, and then to Fremantle, Western Australia, and out to the Indian Ocean.
Note - This product is a DVD
ALL DVDS ARE NOT PIRATED, BURNT OR IMPORTED. THEY ARE GENUINE AUSTRALIAN REGION (4) {UNLESS OTHERWISE STATED SEE 'BOOK CONDITION' TAB ABOVE} DVDS BOUGHT FROM LOCAL MOVIE DISTRIBUTORS. BUY WITH TOTAL CONFIDENCE.﻿﻿