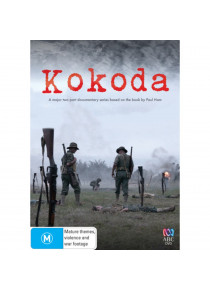 Kokoda was a savage military campaign fought without mercy between foes who seriously underestimated each other a desperate campaign to keep Papua New Guinea from falling to the Japanese during the darkest days of World War II.

Based on the bestselling book 'Kokoda' by Paul Ham and filmed in Australia, Japan and along the Kokoda Track, this documentary series is a raw and intimate story of men under unimaginable pressure.

Narrated by William McInnes. Producer: Andrew Wiseman. Director: Don Featherstone. Written by Don Featherstone, Andrew Wiseman and Uri Mizrahi. Kokoda is based on a best-selling book, Kokoda, by Paul Ham. ABC TV Commissioning Editor: Alan Erson. Produced with the assistance of the Department of Veterans Affairs. Developed and produced with the assistance of Film Victoria. Kokoda is a Screen Australia Making History Production in association with Pericles Films. Developed and produced in association with the ABC TV and Screen Australia.﻿

The documentary follows in the footsteps of Australias ill-equipped and poorly trained conscripts, the chocolate soldiers, and the battle hardened troops of the Australian Imperial Forces, walking the treacherous 98-kilometre jungle trail from Port Moresby to Kokoda, then on to the blood-stained battlegrounds of Gona, Buna and Sanananda.

The documentary includes interviews with Australian and Japanese veterans and historians, letters to loved ones, previously unpublished documents, archival footage, dramatisations in Australia and Papua New Guinea, and, for the first time, high-definition sequences filmed over the length of the track. The diaries of entrenched war correspondents Okada Seizo and Chester Wilmot paint an intimate picture of how soldiers on both sides felt during the battles.

Kokoda introduces the key commanders, including controversial American General Douglas MacArthur, Australias General Sir Thomas Blamey, and Japanese Commander Tomitaro Horii, for who defeat in a campaign that had cost thousands of Japanese lives, was intolerable.﻿