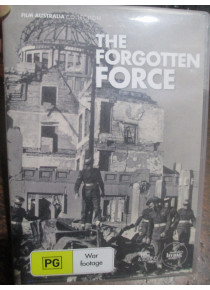 This DVD is a documentary on Australia's BCOF Force 1946-52. 1994 ABC Documentary 56mins duration. All regions Australian Format DVD but will work in all countries .
Over 36,000 Australian men and women, part of the British Commonwealth Occupation Force - BCOF, marched onto Japanese soil after the atomic destruction of Hiroshima and Nagasaki to help out and assist the people in building a new "democratic" society. Japan was ravaged by war and was still very much under the influence of military rule.
With the aid of rare archival and private footage, photographs and eyewitness accounts from both sides of the war The Forgotten Force explores Australia's involvement in this monumental event and also reveals the unfortunate leagacy felt by some of the veterans of the occupation force. Many have died or are suffering from cancer believed to be caused by their prolonged exposure to radiation whilst on duty in Japan. The Australian BCOF base was close to Hiroshima atomic zone.
The documentary explores the various love relationships established between the Australian soldiers and the Japanese. Interesting some diggers never returned they married and stayed in Japan.
Much interesting archival footage with new interviews (1994) with veterans and families.