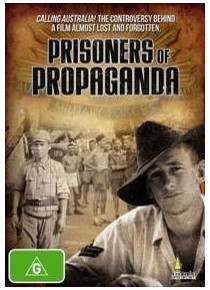 This DVD is a documentary about Australia during the period 1943 as we were anticipating the immediate invasion by Japanese Forces.  A 1987 Film Australia Documentary 59mins duration. All regions Australian Format DVD but will work in all countries .

Indepth look at the burgeoning propaganda movement of World War II﻿. In particular, the film Calling Australia! which was commissioned by the Imperial Japanese Secret Service to instill fear and prepare the Australian public for the anticipated occupation of their country by the fearsome Japanese forces.

Exposing the "exemplary conditions" under which Australian POWs were kept, Calling Australia! remains a controversial documentary which has polarised historians and Australian service organisations. With those named in the film believed to be untraceable, Prisoners of Propaganda uncovers the truth, delves deep into the  mystery behind the film, explores why it was made and how it came to be forgotten. ﻿